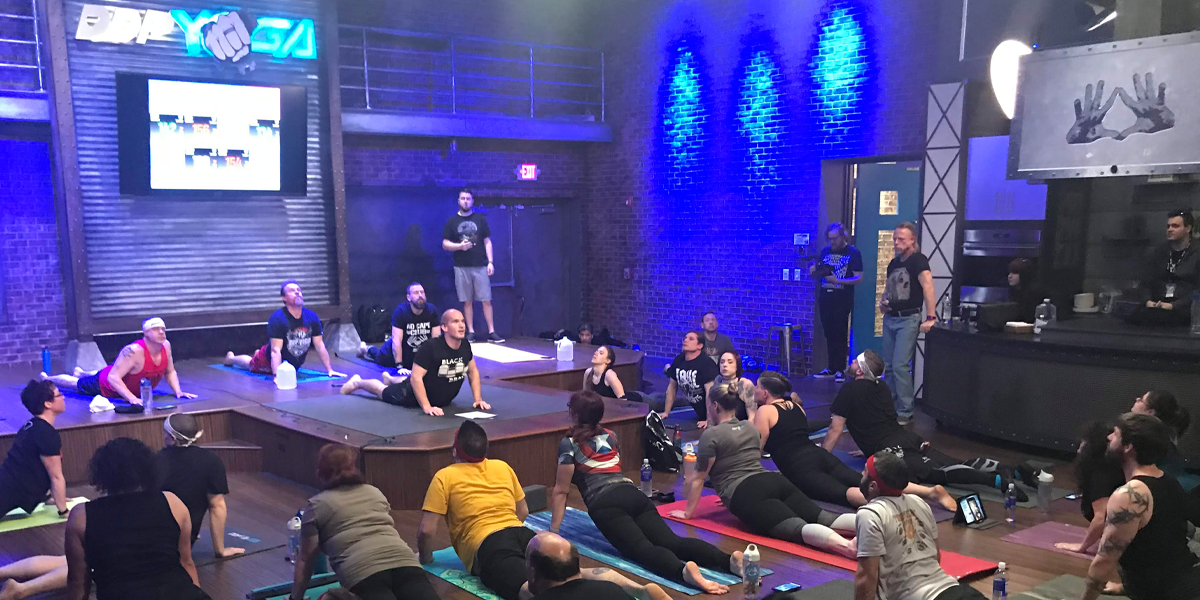 Chances are you’ve seen something about DDP Yoga online.

Or maybe you’ve seen one of the amazing DDP Yoga transformations, such as Arthur Boorman:

Or maybe you’ve never heard of DDP Yoga, and this is your introduction to it.

If you haven’t yet, here are 10 reasons you need to try DDP Yoga.

Check out these stats about our inactivity, according to a study published in 2018:

A number of risk factors are associated with sitting all day, such as:

DDP Yoga gets you out of the chair and moving into natural positions we don’t normally encounter while working or driving.

DDPY Has Positions, Not Postures

First, traditional yoga has postures. DDP Yoga differs because its founder, Diamond Dallas Page, is an athlete. According to him, athletes don’t know how to do postures, but they know how to do positions. That’s why every move in DDP Yoga is called a position instead of a posture.

In DDP Yoga, you won’t find chatarunga. But you will find “Showstoppers,” “Cat Lift,” and “Safety Zone.” DDP Yoga gives each position an English name.

Whether it’s because of our job, a negative situation in our lives such as divorce or illness, or a traumatic experience, we all know what it’s like to be stressed.

Over long periods of time, chronic stress can cause many issues ranging from depression, disease, or digestive problems.

One way to manage stress is through exercise, and specifically, breathing.

Breathing is at the core of DDP Yoga.

For more information, check out How To Breathe To Maximize Your DDP Yoga Workout.

4. You Want To Supplement Your Other Training

DDP Yoga can be a great workout on its own, but it’s a great complement to other forms of exercise.

I’ve worked with athletes from many backgrounds:

Consider adding DDPY to your routine to improve your other endeavors.

5. You Have Pain In Your Hips, Knees, And Low Back

DDP Yoga is a low-impact workout.

Unlike running, your knees, ankles, hips, and low back won’t take a beating on the pavement.

6.You Want a Low-Impact Cardio Workout

If you’re a former athlete whose body is too beat up to continue the types of workouts you used to do, consider DDP Yoga for your cardio workout.

When you do cardio, your muscles engage more. To work hard, they need blood. And to get that blood, your heart has to pump quickly.

You can increase your heart rate through conventional methods such as running.

But if you need to take it easier because of an injury, for example, then DDP Yoga can help you get that heart-racing exercise by standing still.

Here’s how to calculate your ideal heart beats per minute (bpm):

You can use the DDPY Now app to keep an eye on your heart rate throughout your workout, whether you’re doing a freestyle workout or using one of the dozens of videos on the app.

Use the Wahoo Tickr X with your DDP Yoga app to track your heart rate!

8. You Want To Gain Strength

Through dynamic resistance, also known as isometric exercises, you contract your muscles.

Tension stimulates muscle growth. When you lift weights, you’re putting your muscles under tension. You tense your muscles during DDPY, forcing the muscles to tense, and thereby gaining strength.

Muscle growth is stimulated by tension, which you do when you lift weights—your muscles are under load. This is what you’re doing in DDPY.

9. You’re Not Sure Whether You’re Doing The Moves Correctly

But, it might be hard to tell whether you’re doing the moves correctly.

By attending a DDP Yoga class in person or online with a certified instructor, or by downloading the DDP Yoga Now app, you can be sure that you’ll be doing the moves correctly.

10. You Want To Be Part Of A Community

It can be lonely doing DDPY alone on the DDPY app or watching the DVDs.

Join the DDPY community by finding a DDPY class near you or by joining or even starting a group on Facebook!

Drop me a message and let me know whether you’re interested in trying DDPY after reading this article.